Showing posts from March, 2014
Show all

Becoming Minnesota Teacher of the Year 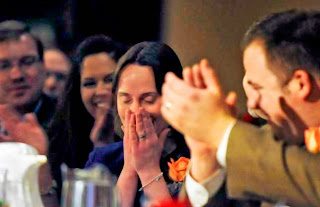 Last May, I was stunned and humbled when 2012 Minnesota Teacher Jackie Roehl announced me as her successor. A bleary 36 hours of media blitz followed, and when the dust settled, I found myself on a ship that had set out to sea. Now, ten months later, the ship is starting to head back home – I’ll announce my successor May 4th – and I return changed. Becoming Minnesota Teacher of the Year happened gradually, in fits and starts. My first speaking engagement at St. Mary’s in Winoma was a wake-up call – it was the first time I’d stood before college students with the responsibility to inspire them into the teaching profession. A lull followed – and I almost forgot I was on the ship. But then I hit a storm. After I spoke out about poverty, teacher character, and democracy at our statewide teacher conference this fall, the Tea Party picked up my speech and reacted bitterly. Education Minnesota helped me to respond to media attention in a way that kept the conversation supportive of p
Post a Comment
Read more