When it comes to film characters, I’d say I most identify with Dennis the Constitutional Peasant from Monty Python and the Search for the Holy Grail. Well, Dennis and his nameless mother. You remember the scene where King Arthur comes upon two peasants mucking around in the fields, and they engage him in a political debate? My favorite line:

Just kidding. Although I do like it when Dennis says this. I just turned 37 and was starting to feel old. Problem solved by Dennis. Here is my actual favorite line:

Dennis’s Mother: I didn’t know we had a king. I thought we were an autonomous collective.

Like Dennis’s mother, I embrace the delusion that I’m working in an autonomous collective. I’m not – I teach within a very large, very hierarchical school district – my work is in no way autonomous. By the grace and mystery of the universe, my teacher colleagues and I occasionally effect positive school-wide innovations as a collective. That’s probably where my delusion originates.

Why do I love this delusion? I think Matt Damon said it best when he called our school system “intrinsically paternalistic.” Well, Matt Damon, whose mother is a teacher, was calling the supposition that we’d all be better off if we applied a business model to our public school system intrinsically paternalistic, and I agree with that statement – but I also think we can take Matt Damon’s idea one step further. I would argue that the entire traditional administrative hierarchy is intrinsically paternalistic. It heralds from the days when women were trusted to teach children but not to run schools; female teaching staff were supervised by male administrators. We still have more male than female administrators today, even though the profession of education is, overall, overrun with women.

I think this disparity comes from:
(1) The lingering gender biases that pervade American society, culture, and economics
(2) The pressure on male teachers, especially those wanting families, to earn more money. The only way to earn more money in education is to climb up to administration. Ergo, admin gets flooded with men.

I have this radical belief that our schools would be best served if the people making the decisions were the ones teaching our kids. In the current hierarchy, the larger the decision, the further one must be from the classroom to make it. A lot of the decisions, once they trickle down, don’t make a lot of sense.

So what if our schools were autonomous collectives, run by teachers? (I mean, all schools are run by the blood, sweat, and tears of teachers – teachers power all of our schools. But what if the teachers also called the shots?

Not just charters, but district schools, too?

Time to go to the National Teacher Powered Schools Conference and find out.

Maybe I’ll find some kindred spirits. Maybe Dennis and his mom will be there.

Popular posts from this blog

If you think you’re too busy to make soup during the school year, think again. This over-scheduled, corner-cutting working mom makes a vat of soup every Sunday afternoon (and lives off of it all week long).

First, one caveat: quick soup is still slower than boxed pasta or a frozen meal. You soup will be ready about an hour after you start cooking it. Fortunately, you can grade papers for most of the soup’s cooking time.

Third, all soup is pretty much the same. Soup recipes follow a similar 3-step template. There are many delicious permutations – this one is really simple and will perk your immune system right up. 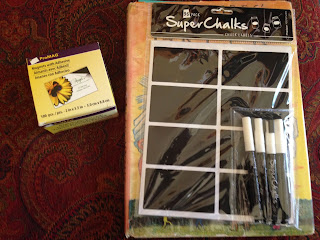 I’ve been imagining happy biology students. Indulging in summertime rest – feet up, ice water in hand – I love looking forward with optimism. When I imagine effervescent 14-year-old biologists, they're talking. In Designing Groupwork, Cohen and Lotan note research showing that learning is significantly related to talking on-task. I’d love to get my students talking next year, but figuring out how to group them has always been a stumbling block for me – it’s a job that’s time-consuming and riddled with potential potholes.

Then I read Sarah Brown Wessling’s blog post on making magnets for student grouping. She sprayed black board paint on business card magnets, and then wrote a student name on each magnet. Sarah keeps the magnets on her white board; this allows her to moves student seamlessly from group to group.

I wanted to try Sarah’s idea, but …

So I found adhesive chalk labels and stuck them on business card labels – a perfect fit!